The village of Les Eyzies is home to under 1,000 people but every year welcomes over 250,000 people from all corners of the globe courtesy of its enviable position in the Vezere valley and its numerous Unesco World Heritage sites. 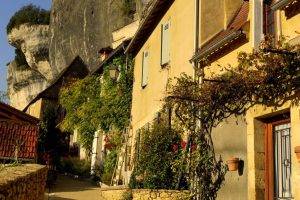 Les Eyzies has long been regarded as the ‘world capital of prehistory’ and is a very popular base for visitors exploring this unique region.

The village itself is a typically Dordogne with yellow stone houses some built into the overhanging rocks, the most popular attractions include:

The National Prehistory Museum, housing one of the world’s most complete collections of prehistoric artefacts. 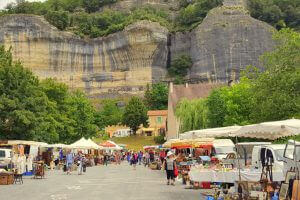 Abri Pataud, a cro-magnon shelter that is one of the oldest in Europe dating back almost 40,000 years.

The cave at the Font de Gaume which contain some of the oldest cave paintings in the world where you can view the actual original art rather than a copy.

The paintings are less dramatic than those at Lascaux but the knowledge that you are stood in the exact same place as the original artist gives these paintings a particular poignancy.

In addition to the many caves and cliff settlements in and around Les Eyzies, there are also a number of prehistoric parks in the region recreating life 10,000 years ago. Some are focussed more on children’s entertainment than historical accuracy!

All attractions are within an easy walk of Le Relais des Roches as are many wonderful restaurants and cafes.

An area of outstanding natural beauty, Les Eyzies can be explored on foot, on bicycle, in a canoe or even on horseback!